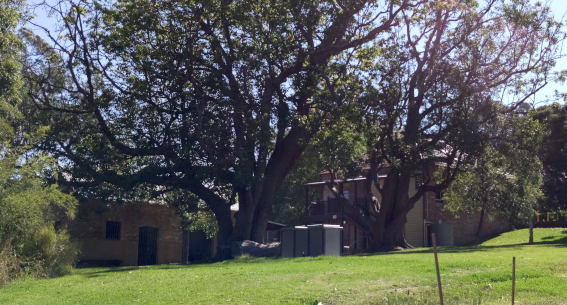 An artist residency awarded by Inner West Council. Begun in October of 2018 and completing in October of 2019. The chance to creatively explore materials and themes to do with the environment, the Sydney Green Ring, and the urban wildlife habitat. Due to the Amalgamation of the three Councils there was some lag time organising the new tenants and so the residency was extended to April 2020. By which time COVID19 restrictions had kicked in upsetting the timeline and completion of some of the proposed projects. All in all an excellent location and a productive residency. Many thanks to the crew from Inner West Council that makes it happen, and their ongoing support for the arts.

The initial residency for the Kandos School of Cultural Adaptation is a collaboration with Stuart Andrews of Natural Sequence Farming fame, exploring the potential of low THC industrial hemp, for the purposes of land rejuvenation.

Hemp is one of the first plants to be domesticated by humans, for human and animal food, cloth and paper making fibre. With tens of thousands of industrial applications low THC industrial hemp is sess petrochemical dependent than either flax or cotton, every part of the plant provides raw materials for mature industries, with myriad new applications found annually. Every product that can be created from mineral oil has, or can be, created from hemp. It is an opportunity that is too good to ignore.

The ongoing suppression of hemp is to the detriment of human health, wealth and happiness.

Retro-innovation is the underlying zeitgeist that has seen the revival of crafting, of the revaluing of artisanal skills, and the desire for a return to “heirloom quality”. The revival of real skills are necessary for resilience into the 21st century, to add meaning and beauty to our lives, and to live with grace and dignity within ecologically defined limits. 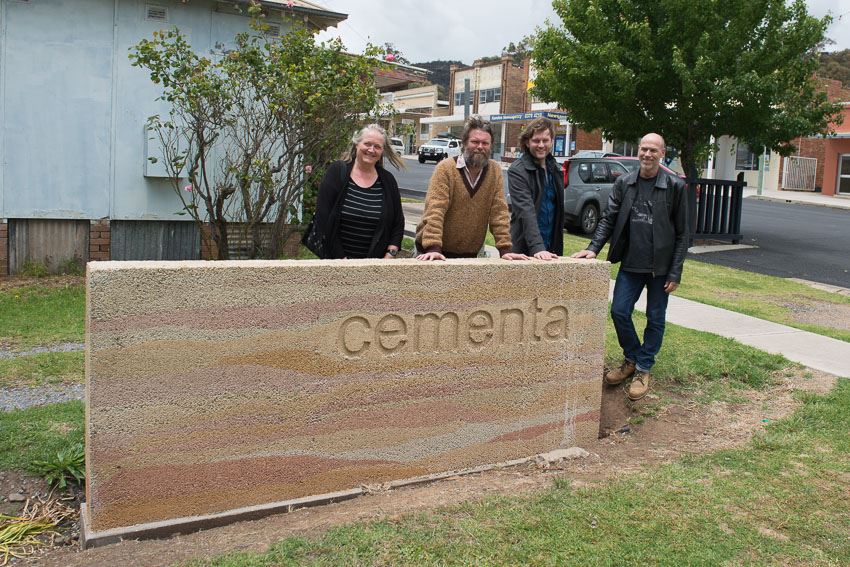 The Cementa ceremonial gate – Angus Avenue, Kandos. L-R Ann Finnigan, Alex Wisser, Sam Paine, Gilbert Grace. Hempcrete wall constructed from Australian and imported hemp hurds/shiv, Australian certified lime binder, with oxides as colouring agent. Hempcrete as a building product is one of the many applications of industrial hemp. Thanks to Australian Hemp Masonry for the instruction and support in this project.

Culture At Work at Pyrmont; SCA at Lilyfield; Big FAG Press at Glebe. 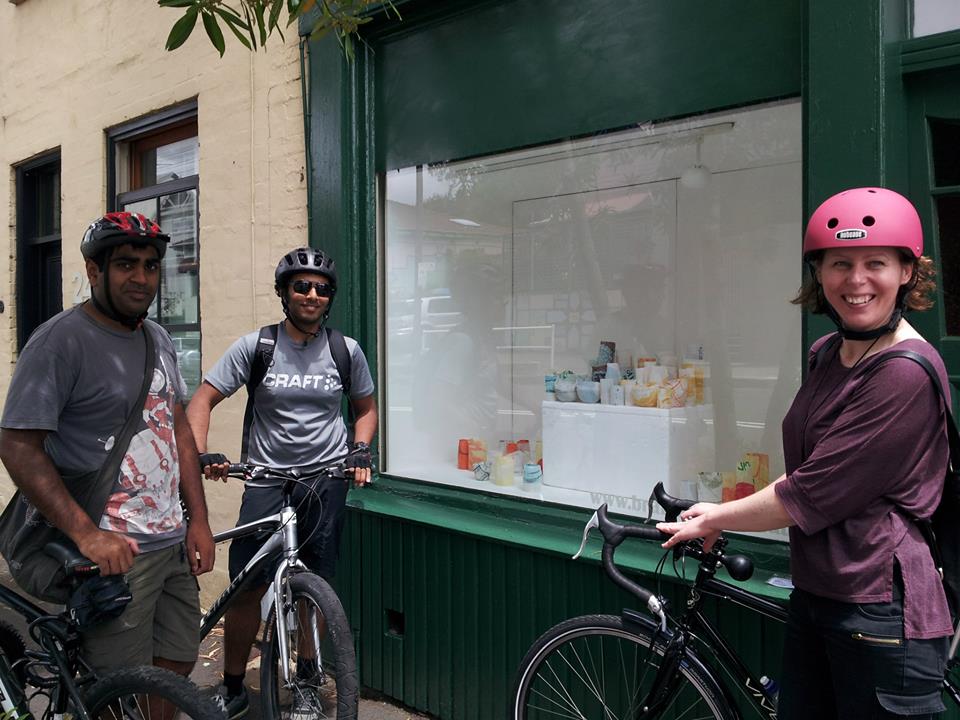 We interwove sites of significance in the study of asbestos with the Inner West with Food and Art Trail to ensure the appetite for art and refreshment were catered to. More photos at https://www.facebook.com/pages/Super-Six/651703291530145 .

The beauty of the artworks delicately counterpoised the brutality of the (non-) application of law and commerce in the real world. Adrian Clement’s review appeared in Das Platforms Emerging and Contemporary Art, 19 January 2014 http://www.dasplatforms.com/writing/super-six.

A series of sketch tours, a bicycle rally, and a ‘radonneur’ style ride, were part of The Common Wheel residency and exhibition at Accelerator Gallery for Culture At Work, Pyrmont.

Cementa 13 was an amazing get together of artists, arts administrators, art appreciators and some often bemused, often enthused locals in the rural NSW town of Kandos. The town lost 98 jobs when the cement works closed down, the Bylong Valley is currently in the news for other reasons.

GPS tracking (and some make do infill when the GPS failed) was used to create this drawing using google maps.

The works illustrate various trees to be found on the GreenWay (and Sydney Green Ring) with suggestions as to proposed or speculative projects that could be accomplished.

This project was supported by a grant from the New South Wales Government – Arts NSW and the Visual Arts and Craft Strategy, an initiative of the Australian, State and Territory Governments. The program is administered by the National Association for the Visual Arts (NAVA).

‘Taking a Line for a Ride’

‘Taking a Line for a Ride’ is a play upon the phrase attributed to Paul Klee, “Drawing is taking a line for a walk”. Klee’s use of whimsy oft belied the seriousness of his intent, which seemed like an excellent place to begin. As the theme for the exhibition was drawing the Sydney Green Ring, using a bicycle to draw in this way seemed entirely appropriate. The video was a response to Lucas Ihlein’s, Mont Royal, Montreal, time lapse video in the Bicycle Film Festival 2007 ‘Bespoke‘ exhibition at Mori Gallery.

More about the Sketching the Gamut show here,   http://thegamutsydney.blogspot.com.au/

This project was supported by a grant from the New South Wales Government – Arts NSW and the Visual Arts and Craft Strategy, an initiative of the Australian, State and Territory Governments. The program is administered by the National Association for the Visual Arts (NAVA).

The materials for this installation are all recycled, with the exception of the light fittings. The sculptural hands are from the ‘Presumption of Regularity’ vehicle, and are themselves based upon the cliched and statistically most reproduced image in history, Albrecht Durer’s, ‘Praying Hands’. The mdf used was reclaimed from an installation in The Ghost Show at Hazelhurst Gallery. The pine is a gift of dumpster diving in Hutchinson St, St Peters.

It could be critiqued in terms of Nicolas Bourriaud’s ‘post production’, being inspired by the works of Christian Boltanski and Hans Haacke.

It got its first outing during the ‘In The Night Garden’ show, part of the 2011 Sydney Fringe Festival. And again in the ‘RAG Time’ Show, at Global Gallery, Paddington, 2011. 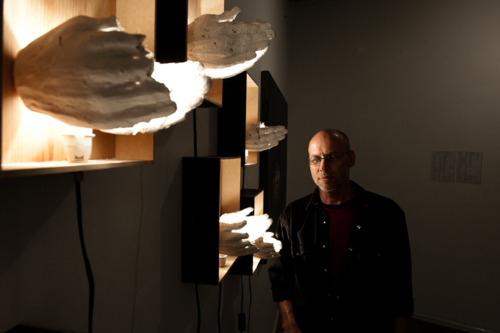 ‘The Presumption of Regularity Vehicle’

During the SIEV X affair Tony Kevin, a high ranking government official, claims the then Liberal Government relied on the ‘presumption of regularity’ to cover activities that breached international maritime conventions and covenants.

The crew of Bock’s Car, following the blessing from a catholic priest, dropped ‘fat man’ on Nagasaki missing its target by a mile and destroying the Mitsubishi torpedo factory. Collateral damage was the Urakami Catholic Cathedral and half Nagasaki’s 14,000 Catholics who had long been persecuted by the local authorities.

In Australia ‘our’ answer to queue jumpers, was to strip them of their humanity locked away in detention centres; some would eventually be driven insane and/or perform acts of self harm. These people – legitimate asylum seekers – were attempting to escape the bombing that has been unleashed upon civilians in countries ‘we‘ are invading while providing for ‘our‘ (and our allies) ‘energy security’ – i.e. profits.

Thanks to the GreenWay Project for the ‘fallen limbs’.

The project was underpinned by a concern for sustainable husbandry and manufacturing. Materials were found, reclaimed and purchased. Fabrics include hemp (subject of research trials), cotton (a large scale crop with its own chemical load), and charcoal (a potential new industry). Materials that, along with flax, the oil from various seeds, and earths, form the basis of traditional painting techniques. Western White Gum (Chinchilla) was obtained after viewing ABC Landline program. The project was a response to the theme of sustainable use of resources and the effects of salination of the Murray and surrounding environment.

The bicycle is still one of the most extensively used and least polluting forms of transport and a reliable workhorse.  The bicycle has become an integral part of my practice, a necessary and affordable intervention into contemporary, motor-vehicle dependent lifestyle.  I rode from Mildura, via Virginia, to Goolwa at the mouth of the Murray. One of the most bizarre moments of the ride was crossing the Murray River at Blanchetown.